The shared history of the Denison Society (DS) and Denison Pequotsepos Nature Center (DPNC) begins in 1930 when Ann Borodell Denison Gates bequeathed the George Denison house (The Homestead), its historical contents and approximately 175 acres of land, to the Denison Society.

In the spring of 1943, Mystic Garden Club member Adele Erisman suggested the formation of a wildlife sanctuary for southeastern Connecticut to honor Annie Gates’ love of birds (Annie Gates had been a founding member of the Mystic Garden Club). Members of the Denison Society gave a series of talks to raise money for the incorporation of the Sanctuary, and in 1945 the Society voted to approve leasing the land south of Pequotsepos Road to a wildlife sanctuary organization for a period of 25 years. The terms of the lease were $1 per year.

In 1946 the Denison Society signed articles of incorporation, and Pequotsepos Wildlife Sanctuary, Inc. was formed as a separate organization from the Denison Society, with a shared board of trustees. Thomas Elroy Jr. was the first Sanctuary Curator, establishing trails and overseeing the creation of the pond and parking lot. Under his leadership, educational programs were established and both the Trailside Museum and a trading post were set up the in the barn.

In 1956, William Wylie succeeded Elroy as Sanctuary Curator, expanding programs and building a Curator’s Residence (now DPNC Preschool) with the help of volunteers. With additional support from both the Sanctuary and the Society, the new Trailside Museum (part of the current Main Building) was completed.

In 1962, Robert Kunz took over as the third Curator. During his tenure, the Connecticut Conservation Association (CCA) was charted and operated jointly with the Pequotsepos Wildlife Sanctuary. CCA was one of the first statewide conservation organizations and worked to preserve the environment, including efforts to stop the spraying of DDT at Barn Island. These efforts, while noteworthy, focused efforts away from the original goals of land and trail stewardship, as well as local educational programming at the Denison site.  In 1970 the Sanctuary/CCA notified the Society of their intent to repurpose the building for office space for the administration of their statewide conservation efforts, eliminating classroom space and most programming. The Society felt the original intent of the Sanctuary had changed and the current use jeopardized the care and preservation of the local Denison land so dramatically that in 1971 the lease with the Pequotsepos Wildlife Sanctuary was canceled and the organization was dissolved.

However, from 1976-1990 DPNC was synonymous with experienced naturalist and birder Robert DeWire, the second Director. Under Bob’s leadership the organization delivered up to five educational programs per day. By 1988, due to expansive growth in programming and membership, DPNC committed to the construction of a 2,800-square-foot addition. The Denison Society donated funds towards this effort and in return, retained ownership over the buildings and the right to use the facilities for meetings. In 1990 Bob DeWire retired to start his own environmental educational organization, NatureScapes, and Stanton Simm was hired as Administrative Director.

In 1992, the Denison Society spearheaded a campaign to purchase the 50-acre Morgan Farm, including the meadows and trails on the north side of Pequotsepos Road (site of the current Denison Farmer’s Market).  At that time, Denison Society fundraising literature noted the addition of Morgan Farm would connect several properties and “extend a permanent greenbelt” through the Nature Center, across the Morgan Farm and onto Mashantucket (Avalonia Land Conservancy) land.

That same year, Margarett Jones was hired as Executive Director. Maggie oversaw the construction of trails on the newly acquired Morgan Farm property, as well as the 1998 Metamorphosis Campaign to renovate the natural history exhibits, build the treehouse classroom and create necessary boardwalks and bridges throughout the property. The 2013 Campaign to Save Coogan Farm added an additional 45 acres of property bordering Homestead land. The addition of this property expanded the greenbelt and strengthened the historical connection between the Denison Society and the Denison Pequotsepos Nature Center by preserving the original 1654 homesite of Captain John Gallup, Captain George Denison’s neighbor.

In 2019 the Denison Society purchased the Oliver Denison house across the street from the Farmer Market, further establishing a contiguous property surrounding DPNC and the Denison Homestead.

Also in 2019, Davnet Conway Schaffer succeeded Maggie Jones as Executive Director. Davnet joined the DPNC in 2002 as Early Childhood Education Director and in 2006 developed one of the country’s first nature-based preschools in the former Curator’s Residence. In 2015, after significant organization growth resulting from the acquisition of Coogan Farm, she took over management of internal operations as Associate Director. Just months after taking over as Executive Director, Davnet faced the challenge of piloting the organization through a national shutdown and subsequent months of a global pandemic while continuing to build support from the membership, trustees and program participants while moving towards a goal of institutional sustainability.

As it was before the pandemic, and today as we continue to move to a post-pandemic future, nature, open space and refuge play a critical role in the physical, mental and ecological health of our community. 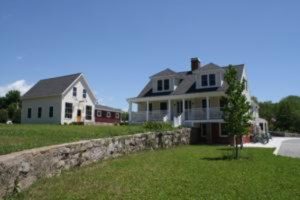 In September 2013, Denison Pequotsepos Nature Center, in partnership with the Trust for Public Land, purchased 34 acres of the historic Coogan Farm property on Greenmanville Avenue in Mystic, capping a two-year Campaign to Save Coogan Farm.

With the donation of 11 additional adjoining acres, the Nature Center created the 45-acre Coogan Farm Nature and Heritage Center. It is the last parcel of undeveloped parcel of farmland between downtown Mystic, Mystic Seaport and Mystic Aquarium. The property, with sweeping views of the Mystic River, contains 370 years of American history, four early successional habitats supporting more than 10 species listed by the U.S. Fish and Wildlife Service as high conservation priority, and protects two crucial watersheds.

The Nature Center is grateful for the efforts of more than 60 volunteers and contributions from more than 760 donors and the Trust for Public Land to help us preserve this critical piece of nature and history.

Bordering the Mystic River, the property now known as Coogan Farm has been an important part of the history of Mystic for thousands of years. Indigenous Pequot people inhabited the area during the summer months, traveling the estuaries in dugout canoes while exploring the rich hunting and fishing grounds.  The arrival of Europeans began the process of pushing the Pequot people off their land and culminated in the conflict of the Pequot War. The war ended in 1637 primarily due to the massacre of over 500 Pequot people at Fort Mystic just across the river.  After the war, many Europeans were granted land by Governor Winthrop for their efforts in the Pequot War. Captain John Gallup received a 500-acre land grant west of Captain George Denison’s land grant and eventually bounded by the Mystic River at the farthest western edge. Gallup built his house on the west slope of the north-south ridge that divides the land. A stone-lined well marks the approximate location of the old Gallup Homestead. Recent clearing on the property has revealed what we believe to be the site of this early homestead.

Captain John Gallup joined Captains John Mason and George Denison, and their troops in the Great Swamp Fight in Rhode Island, which was a part of King Philip’s War. Gallup lost his life in the conflict and was buried in a mass grave. For another 200 years, the Gallups continued to occupy or own the land until the Greenman brothers of Mystic purchased the 80-acre Lower Farm of the Gallup land sometime in the 1840s. George, Clark and Thomas Greenman of the shipbuilding trade used the land as a farm to ensure a supply of fresh produce, milk and cheese from the gardens and orchards of the farm.

In 1888, George Greenman sold the Lower Farm to his niece Harriet Greenman Stillman. She in turn transferred the land to her cousin (Charlotte) Elizabeth Greenman Stillman. Elizabeth was the wife of Thomas Edgar Stillman, Esquire of New York, responsible for the construction of the elaborate masonry foundation on the high ridge of the farm. This ridge separated the Mystic River Valley from the Pequotsepos Valley.

The Stillmans inspired many a romantic tale that has changed throughout the centuries. Some say Thomas was building the magnificent mansion for his blushing young bride Elizabeth, before her untimely death. It is true that Elizabeth Greenman Stillman died in 1901, halting the construction, but their marriage was years earlier and their four children had since grown.

In 1902, Thomas Stillman sold the acreage of the Lower Farm to Walter C. Morgan. After Clara Avery Morgan inherited it from her father and married Clarence A. Coogan in 1918, the property became known as Coogan Farm.

The Peace Sanctuary lies on a hillside across the Mystic River from Coogan Farm. More than 150 years ago, the Sanctuary was an open rolling pasture defined by stone walls. On the summit of the rock ledge known as Great Hill, a a cluster of widely spaced oaks grew, creating an area called Fish’s Grove.

The Peace Union pushed for non-resistance under all circumstances at home and abroad and for progressive reforms. Speeches were made advocating non-violence, women’t suffrage (1870) and denouncing the KKK (1871), lynching, racial prejudice and championed Native Americans, in 1883. By the end of the 19th century, nine hundred teams of horses and nearly 10,00 people arrived annually for the Peace Meetings. As larger crowds gathered each year, peddlers (known as “fakirs”) set up their wares near the gates at the base of the hill on River Road.

In 1914, famous naturalist and explorer Mrs. Mary L. Jobe, later Mrs. Carl Akeley, purchased the Peace Grove as a campsite for girls. From 1916 to 1930 Jobe ran Camp Mystic, where 80 or more girls ages 8 to 18 swam and boated on the Mystic River, rode horseback down country roads (River Road was a dirt road at the time) and explored the area’s wooded acres.

In 1924, Mary Jobe married Carl Akeley, a famous taxidermist, inventor, sculptor, and African explorer. On their first joint expedition to Africa Carl Akeley died tragically on Mt. Mikeno, hundreds of miles from civilization and medical aid. Mary returned to her home in Mystic, which she built on top of the hill, to dedicate her life to continuing Carl’s legacy through lecture tours, writings and her own African safaris.

Camp Mystic became less popular during the Depression, and after the 1930 season, Akeley closed the camp. After retiring in her home on top of the hill, Mary Akeley became more and more reclusive. She packed her home with mementos of the explorations she and her husband took.

Mary Akeley died on July 19, 1966 at Mary Elizabeth Convalescent Home in Mystic. She entrusted her River Road property as a nature preserve. The Peace Sanctuary, as the property has been renamed, is managed by Denison Pequotsepos Nature Center with the guidance of trustees of the Akeley Trust. The Nature Center carries the intent of the trust’s conservation and education credos, using the Sanctuary for outdoor education hikes, programs and classes while also stewarding the land as a public nature reserve.